October is quite possibly one of the best months in Bend! The weather is cooler, the trails are less packed, and fresh hops are flowing at the breweries – not to mention pumpkin brews towards the end of the month – that’s a nice Halloween treat.

This year, we have something new in Bend – The Day of the Dead Cyclocross Festival. Now Day of the Dead is in its essence a celebration to remember our loved ones who have passed to the other side. On this day (Día de los Muertos) offerings to the dead are made in many forms. From simple gifts of food, to ornate shrines (sometimes called altars) tributes are paid to their souls. It’s really just another reason to party Mexican style, so there you go!

So now we have yet another festival mash-up in Bend, this time the ingredients are comprised of bikes, beer (you gotta have beer), and the dead. And to be given the opportunity to work on something like that was just to hard to pass up. Why? I’m a big fan of beer – check out my Little Woody logo – a fan of biking and bike safety – and I lived in Mexico as a kid and remember this day specifically more than any other. Cool dark evenings on rain soaked cobblestone streets, dimly lit by candles (veladoras) – with really, really tall skeletons walking around, everywhere. I realize now they were people on stilts, and do recall my parents explaining that to me – but I was like 9 or something – at the time, the fantasy was way better than the reality – I also thought you had to have really big shoulders to play football, but whatever.

Skeletons and skulls (calaveras) are very prominent throughout this celebration thanks to one artist in particular, José Guadalupe Posada. His style of illustration truly captured the living, the dead, the spirit of this day and has no doubt inspired others to do the same. 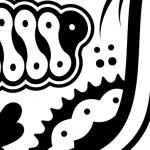 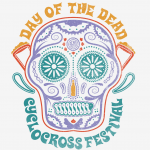 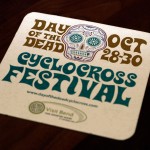 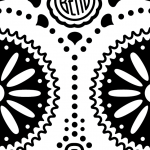 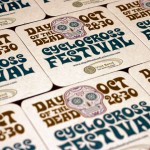 Another type of skull commonly associated with Day of the Dead is the Sugar Skull. A candied sugar or chocolate skull made as an offering to the dead. The idea is to make something sweet and delicious to attract the soul of the loved one who has passed. Then once their soul has risen, the two of you party and drink tequila together for a day. Awesome! I dig the idea, and the look of the Sugar Skull. Mix in some bike elements (chains, sprockets), beer (bottle), and Bend – and you have a logo for a Festival! Hope you dig it. My part was the logo design – the Visit Bend peeps did a good job pulling the rest of the creative together. Make sure you check it out next weekend, there’s a bunch of stuff happening around the festival. Here’s the official Day of the Dead Cyclocross Fesitval website for all the dets!

If you happen to be cruising around Bend and stop in to Brother Jon’s Public House for a beer or massive sandwich – you’ll notice the Ride Safe Posters and now the coasters too. If you own a local place where peeps eat, drink, or chill and either walk, ride, or drive to get there… END_OF_DOCUMENT_TOKEN_TO_BE_REPLACED

Just got the Official News Release: The Bend Metropolitan Planning Organization in collaboration with the city of Bend Transportation Division, Bend Police Department and Commute Options for Central Oregon is proud to be part of an education campaign directed towards safe bike riding in Bend this summer. The campaign developed by design firm Perez Design,… END_OF_DOCUMENT_TOKEN_TO_BE_REPLACED

Posters were designed to bring rider awareness to the citizens of Bend, Oregon, addressing three key issues related to bike safety: Wrong Way Riding, Drunk Riding, and Rider visibility – See and be Seen. These posters are part of a campaign including other elements that will be displayed at various retail establishments in Bend, Oregon… END_OF_DOCUMENT_TOKEN_TO_BE_REPLACED